Well, here we are friends, at the end of another year. It is during this season that so many of us like to both look forward to what the new year has in store as well look back to what we’ve recently gone through. In other words, it’s time to sit down and decide what were the best things that 2013 threw at us. And since comics are kind of my jam, that’s what we’ll be ranking today. So here we go: my picks for the best ongoing series in 2013!

These are, of course, my own opinion, and will likely differ from your own.

To me, this comic epitomizes the Slow Burn approach to telling stories. Rather than tell a series of isolated story arches, Brian Azzarello, Cliff Chiang and Tony Akins have been telling us one long story since this book relaunched. While this sometimes means that we have issues that do little to advance the plot, it also means that when the payoffs do happen, they are that much more satisfying. When we’ve seen Wonder Woman go through her defeats, it’s all the more exhilarating when she succeeds. When we’ve taken the time to know the supporting cast, it’s far more crushing when they die. And with Diana’s new status quo as the reigning god of War, I’ve little doubt that we’ve got a lot more fun to come. 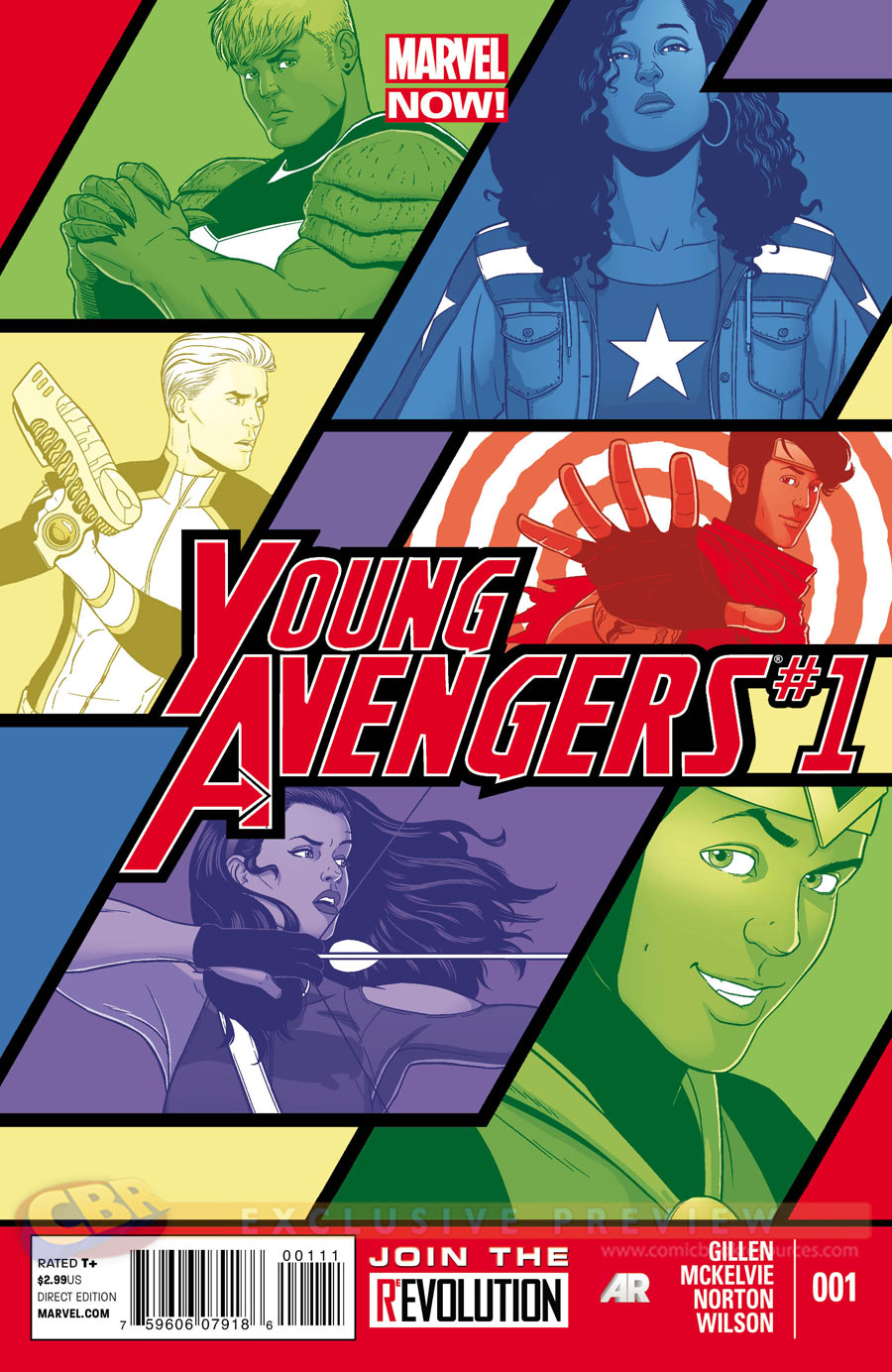 Now, I have to admit that I’m normally rather hesitant to pick up a book with an adolescent/young-adult cast; I just feel that they are too often prone to angst-y melodrama and other cliches. Yet here I am, with Young Avengers on display as my pick for the #4 comic book of 2013.

This is largely due to the talents of writer Kieron Gillen, a man who understands how to write young people well, as well as strong, engaging characters. Really, Gillen’s work with Loki alone makes this book worth reading, so it’s fairly awesome that the rest of the cast is extremely fun as well. With the recap page rife with hashtags and our heroes spending their down time getting inter-dimensional Korean barbecue between battles, Gillen wholeheartedly embraces the youth of these characters, and doesn’t let angst get in the way of the fun.

On top of all this, we also have Gillen’s old cohort Jamie McKelvie serving as the series’ main artist, which pretty much guarantees a feast for the eyes every month. Not only does he command great line work, his page layouts can be simply jaw-dropping. I mean, just look at this:

So yeah, that’s some awesome stuff. Put it all together, and you’re in for a fun ride.

Jonathan Hickman has been a very busy man. When he’s not giving us strong indie books like East of West, he’s been the driving force behind Marvel’s big picture by running their flagship franchise even as it sprawls out into multiple monthlies and simultaneous events. And while Avengers, New Avengers, and Infinity have each been great in their own right, they combine together to form something truly special when read together, like some sort of comic book Voltron.

With the backing of talented artists such as Steve Epting, Dustin Weaver, and Jerome Opena, Hickman has given us a sprawling adventure that gives you just about everything you could ever want in a comic book. With high-octane action sequences, intimate character moments, and tense drama, there is truly something for everyone. Combine this with the way Hickman expertly balances gigantic casts and gives us hooks that can only be appreciated by readers of both books, and you have the opening act of what will probably be an Avengers run for the ages.

If you haven’t already been checking out Saga, you really need to start; it is hands down one of the best comics in circulation right now. First of all, we have one of the preeminent writing talents in the comics industry in Brian K Vaughan, the genius behind such works as Ex Machina and Y: The Last Man. Those who are familiar with his past offerings know that Vaughan writes some of the most engaging characters you will ever read, complete with believably human faults, and I’m glad to say that this trend is still going strong (The Will, Alana, and Izabel are particular favorites of mine).

This title distinguishes itself from Vaughan’s past work, though, by embracing an over-the-top insanity. This is a book with magical satyrs warring with futuristic flying men and robot royalty, a universe where planet sized fetuses consume swathes of space-time, a love story that takes us on a grand tour of a vibrant, living universe that’s as beautiful at times as it is bizarre.

And all of this is brought to life masterfully by Fiona Staples, who is quickly emerging as one of the industry’s top artists. She is able to depict small, intimate moments and grand, epic spectacle with equal power, making this book a treat to read with each issue, even when she’s drawing such unsavory things as a very large and very naked ogre.

So I say again: run out and get it if you haven’t already. 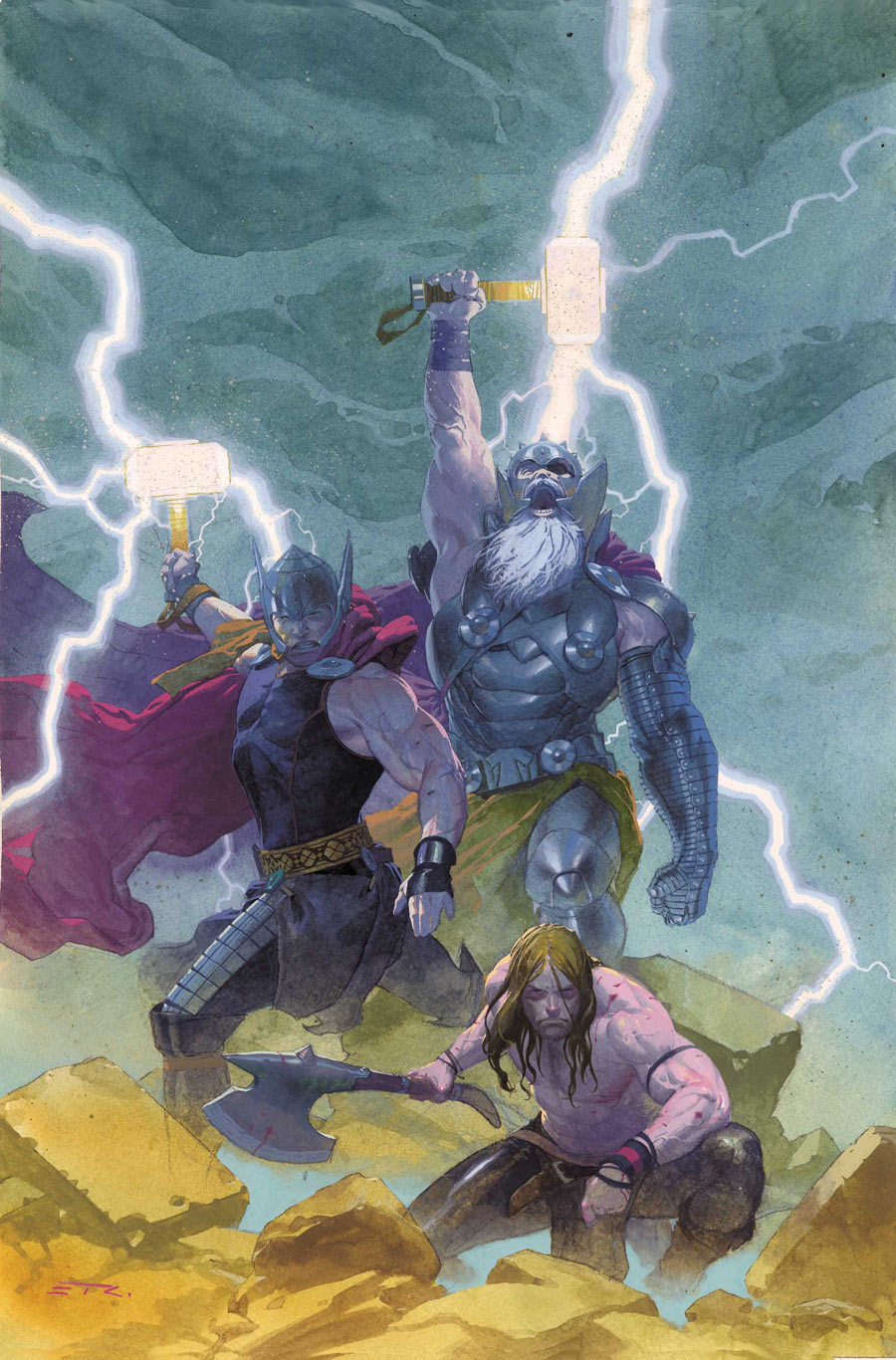 This comic. By Odin’s Eye, this comic is so good, and I’m not just saying this because I’m partial to Thor.

Every now and then, you have a book where the right character is given to the ideal writer, and the right story is given to the perfect artist, creating a comic book that becomes so much more than the sum of its parts. Such is the case with Thor: God of Thunder, a book that’s funny, moving, inspiring, thrilling and beautiful all at once.

In particular I’m thinking about the God Butcher and God Bomb story arcs, brought to us by Jason Aaron and Esad Ribic, which follows Thor through three stages of his life as he struggles against the genocidal Gorr, the God Butcher. Through these arcs, Aaron displays his unique talent for telling stories of grand scope sewn together with wonderful insanity, with scenes that take us to the majestic Omnipotence City, through the ruins of an apocalyptic Asgard, and zipping around space on stellar viking longboats and on the backs of Star Sharks, all of which are rendered immaculately by Ribic. The appeal goes beyond mere spectacle, however, as we are given a peek in to who Thor is, has been, and will be, each with their own distinct voice, and each with their own anxieties. The execution on these characterizations is beyond reproach.

And then, of course, we have Thor beating the daylights out people with his hammer.

Ultimately building up to the best super hero battle I’ve seen in a long, long time.

The current exploits of the God of Thunder are something truly remarkable. You owe it to yourself as a comic fan to check them out.

So that’s my list! What comics would you put on yours?