Hello, folks, and welcome to another installment of Talking Tropes, a segment where we take a look at some of the most prevalent tropes in the comic book medium and try to understand why they are used. For today’s installment, we’re going to be looking at a specific variation on a trope dubbed Status Quo is God that keeps certain characters from overcoming tragic afflictions, and serves as the reason that poor Ben Grimm will never get to stay human.

As many comic readers no doubt already know, the Fantastic Four have been a prominent fixture in the Marvel universe for over 50 years, what with them having essentially created it and all. Over their long and storied history, this team has gone on many astounding adventures and accomplished some legendary deeds: they’ve traveled through time and across dimensions, turned back armies and cosmic gods, and saved our world more times than we can count. Perhaps the most impressive of the group is their leader and resident genius, Reed Richards, who has accomplished feats that boggle the imagination. As the reigning Smartest Man In the World, Mr. Fantastic has created portals to an antimatter universe, built ships that can whisk you across the universe at FTL speeds, and created all manner of fantastical devices that can accomplish astounding deeds. And yet, even with all his amazing accomplishments and unquestioned brilliance, Reed has never been able to correct his greatest failing by turning his best friend Ben Grimm back into a human being.

And honestly, that’s more than a little perplexing. As stated before, Reed has done some amazing things in his time, whipped up machines that can fend off Celestials, translate any language in the universe, and even travel the Afterlife. And yet while such challenges such as this have proved to be no match for the mighty intellect of Reed Richards, it seems that helping a dear friend achieve his greatest desire, a task which Reed has devoted more time and effort to than any other, has always eluded him. Why is that? Why can’t this man who does the seemingly miraculous ever do this one specific thing, at least not permanently?

And for that matter, what about all the other poor, bedeviled denizens of our favorite comic books? Why is it that Cyclops can never gain control of his powers, or Hank McCoy can never regain his human appearance, despite the array of resources the X-Men have at their disposal? Why can Bruce Banner, another of the worlds smartest men, not cure himself of his transformations? Why can’t Superman, who routinely does the seemingly impossible, ever seem to restore the shrunken city of Kandor? All of these characters live in a world of wonders, where fantastical things happen every day, and yet there remain a number of afflictions and failings that remain except from all the miraculous solutions that pop up everywhere else.

So why is that?

Certainly, the comics do address these issues quite a lot. In the case of Ben and Marvel’s Merry Mutants, the explanation usually falls within the lines of it being impossible to change their very genes. This makes a decent amount of sense, though it is still somewhat inconsistent with how advanced science and technology are otherwise depicted in those worlds. But these are inconsistencies we’ll have to put up with, because they are very much a necessary evil because of the way the comic book stories are structured.

Unlike movies, books, or TV shows, comic books do not tell stories that have an ending; rather, they form a continuous, unbroken narrative told in an episodic format. Batman will never have a final chapter, nor Spider-Man a series finale, nor the Hulk a final scene. For the overwhelming majority of super heroes, there is simply no end to their character arcs. Certainly, there is room for them to learn, grow, and evolve, but never for them to undergo such a drastic change that their story ends, or for their defining characteristics to go away.

Or at least not for very long. Our primary example, the Thing, has indeed regained his human form on a number of occasions, but only for a short time. That’s because over the course of years and decades, he and other characters like him have come to be identified by certain traits and qualities. Ever since his debut, Ben Grimm has been a compelling character because of his struggle as a good man trapped in the body of a monster. If he were able to regain his humanity or switch back and forth at will, he just wouldn’t be as captivating to the readers.

As is true of most things in life, this idea is probably best explained by Neil Gaiman. In his story Marvel 1602, which follows our familiar Marvel characters in a less familiar Elizabethan setting, Gaiman gives us a conversation between Ben and Reed Richards in which the former asks about the likelihood of restoring his humanity, to which Reed responds thusly:

The natural sciences say yes, a cure is possible. But the laws of story would suggest that no cure can last for very long, Benjamin. For in the end, alas, you are so much more interesting and satisfying as you are. 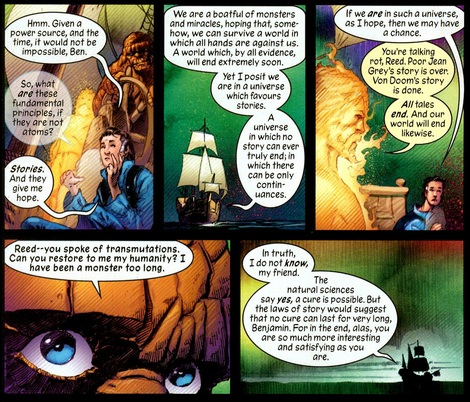 Ben Grimm cannot find a permanent cure because that isn’t his story, or at least not the one he’s in right now. In other stories, like Alan Davis’ Fantastic Four: The End, a Ben Grimm from a hypothetical future does indeed gain the power to switch his powers on and off at will. But THAT story and many others like it are always just tantalizingly out of reach for our own Ben, who must always wait for that Not-Too-Distant-Future that will likely never arrive. Maybe some day he will cross that horizon and will become part of a new story. But in the meantime, the Status Quo is God, the amazing science of the world he lives is agonizingly powerless to help him, and Ben has to tragically yet intriguingly remain a rock monster.

So there you have it! As always feel free to tell me what you think, let me know how I can improve, and thank you so much for reading!