Hello, friends, and welcome to Outright Geekery! You’re just in time to join us for our annual tradition of counting down the top comics of the year! This year, though, we’re spreading the love around by making separate lists for the different publishers, and it just so happens that it falls on me to do the write-up for the House of Ideas. And so it is that I bring you may picks for the Top 5 Marvel Comics for 2015! It’s been an interesting year, with this year’s big event being a whole lot bigger than usual, but there has also been a number of smaller-scale stuff mixed in as well. Which ones made the cut? Read on to find out!

If you thought this list was going to be a reprieve from this year’s constant Star Wars hype, then you’re going to be disappointed. When Disney bought the rights to Star Wars, that not only brought the promise of new films, but also the inevitability of their other recent high profile acquisition, Marvel, getting the license to publish Star Wars comics. Soon, creative teams were announced, and hype began to build for Star Wars being written and drawn by some of the top talents in the industry. With great writers like Jason Aaron, Kieron Gillen, Mark Waid, and Greg Rucka working with the likes of John Cassaday, Stuart Immonen, Phil Noto, and Terry Dodson, we were sure to get some top-shelf stuff.

And fortunately, these comics delivered on that promise. We get taken on a wild ride with some iconic characters, with thrills, shocks, and moments you’ve always wanted to see. Do these comics have an unfair advantage by being part of a beloved property? …Yeah, kind of. Am I wimping out by not singling out just one title? Absolutely. But all of these titles have been genuinely great, and all of them deserve to be checked out. So stop what you’re doing right now and go read them. 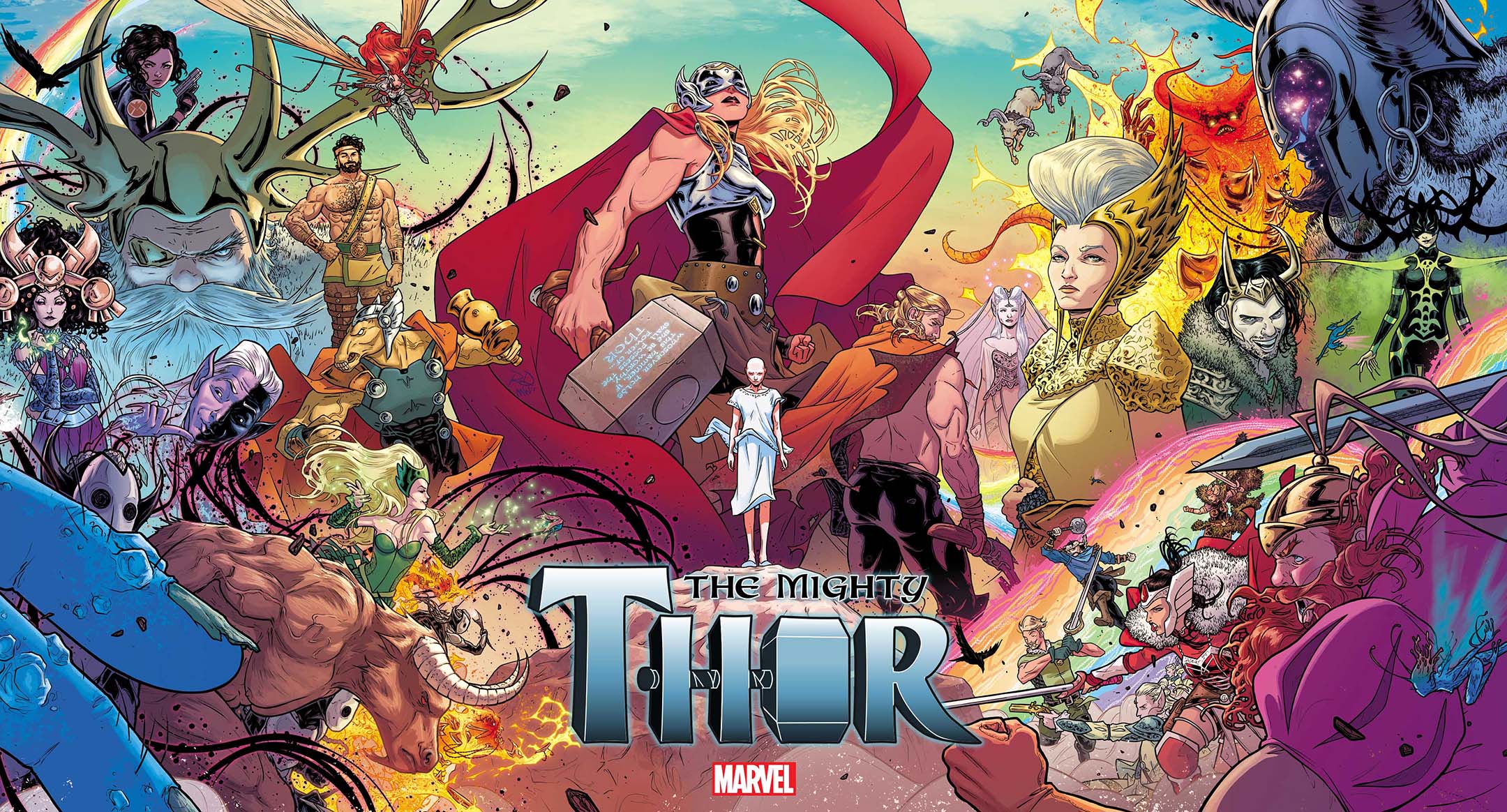 Those of you who have seen our previous lists have no-doubt pieced together that I’m a pretty big fan of Jason Aaron’s run on Thor. Well, that hasn’t changed, because coming up next, we have the continuing adventures of the Goddess of Thunder. Month after month, this book continues to showcase some of the most epic, grandiose adventures in comic books, giving a suitably large scale to the adventures of godly beings. In addition to the high-flying adventure that has been the series’ hallmark for the last few years, the title has also had a good touch of intrigue recently. The build-up to the reveal of the new Thor’s identity was handled quite well, and added a lot to the fun. And I’m glad to say that the transition to a new Thunder God has not only avoided a drop in quality, but has also provided some great new character moments. Jane brings a lot of heart to the title as she deals with her very human frailties in between defending the nine realms, and our old Thor is still engaging to read in his new role.

If it seems like I’m running out of ways to praise Jason Aaron’s writing, it’s his fault for keeping such a consistent level of quality. On the artistic side, Russel Dauterman has stepped up to the plate and sent the ball out of the park with some amazing work month after month. Thor’s adventures for the last few years have been a god-send (get it?), and they continue to be a mainstay on my list. 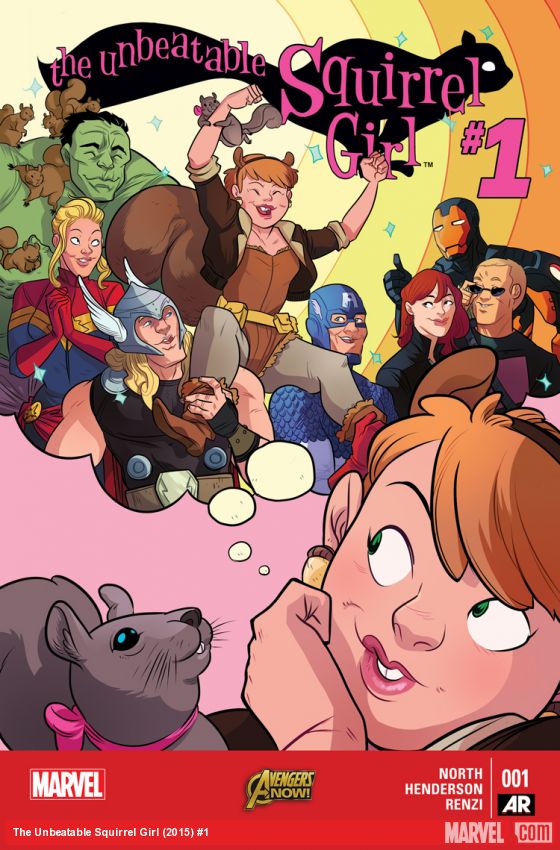 If you like your comics a little on the quirky side, then you, friend, are in luck. Coming in at #3, we have the exploits of the Unbeatable Squirrel Girl! For me, this pick is a pretty unlikely one considering that I’ve never been a big follower of Squirrel Girl in the past; I just knew her as an oddball character who was part of a running gag in which she defeated people who were way out of her weight-class. Even with this current run in particular, I arrived pretty late in the game, having missed out on the first #1 this year. But when the second #1 came out, and the blurb on the cover was enough to make me laugh, I picked up the issue. This in turn led to me frantically hunting down the rest of the run, because holy crap, is it good.

This comic fully embraces the quirky nature of the character, both in art style and writing. The creative team of Henderson and North seems tailor-made for the character, embracing her enthusiasm and never taking things too seriously. To see this, you don’t need to look any further than the first scene of the first issue, where Doreen cheerfully sings her own theme-song while foiling some muggers.

All told, this comic is a real breath of fresh air. It relishes in being goofy, and is one of the funniest things I’ve read in a very long time.

To those of us who read a lot of comics, yearly mega-events have become a part of the status quo; come hell or high water, the Big Two will have at least one, maybe two far-reaching crossovers with dire stakes and a ton of hype. Over the years, these events have had a wide range of quality, with some being solid and others being abysmal, but every once in a while, we get one that is simply amazing. Fortunately for comic readers this year, Secret Wars falls squarely into the “simply amazing” category. Jonathan Hickman and Esad Ribic give us a story that has been building up for years in the pages of Hickman’s Avengers and Fantastic Four, and the scale here is fittingly gigantic. The story starts with the destruction of the Marvel Universe, and only builds up from there.

Both the main story and its tie-ins take place in Battleworld, a patchwork reality cobbled together from bits in pieces of decade’s worth of Marvel stories. This allows the writers and artists to showcase an impressive collage of classic stories and characters, both as homages and subversions. But the real draw here is the main book itself, where the talents of two master storytellers truly shine. I mean, honestly, let’s just go down the list of some of the scenes in this book (spoilers): the Ultimates fighting the Avengers over the scraps of dying worlds, Groot, fused with the World Tree, fighting against Galactus, and Doctor. Fucking. DOOM. tearing out Thanos’ spinal column. This event has been filled with jaw-dropping moment after jaw-dropping moment, and it just doesn’t let up for a moment.

There have, however, been a number of frustrating publication issues, with an extra issue added on and numerous delays, to the point where the post-Secret Wars relaunch books started coming out about 3 months before the end of Secret Wars. While that does suck, it hasn’t diminished the quality of the book itself, which might be both Marvel’s best event book and one of the best Doctor Doom stories ever told. 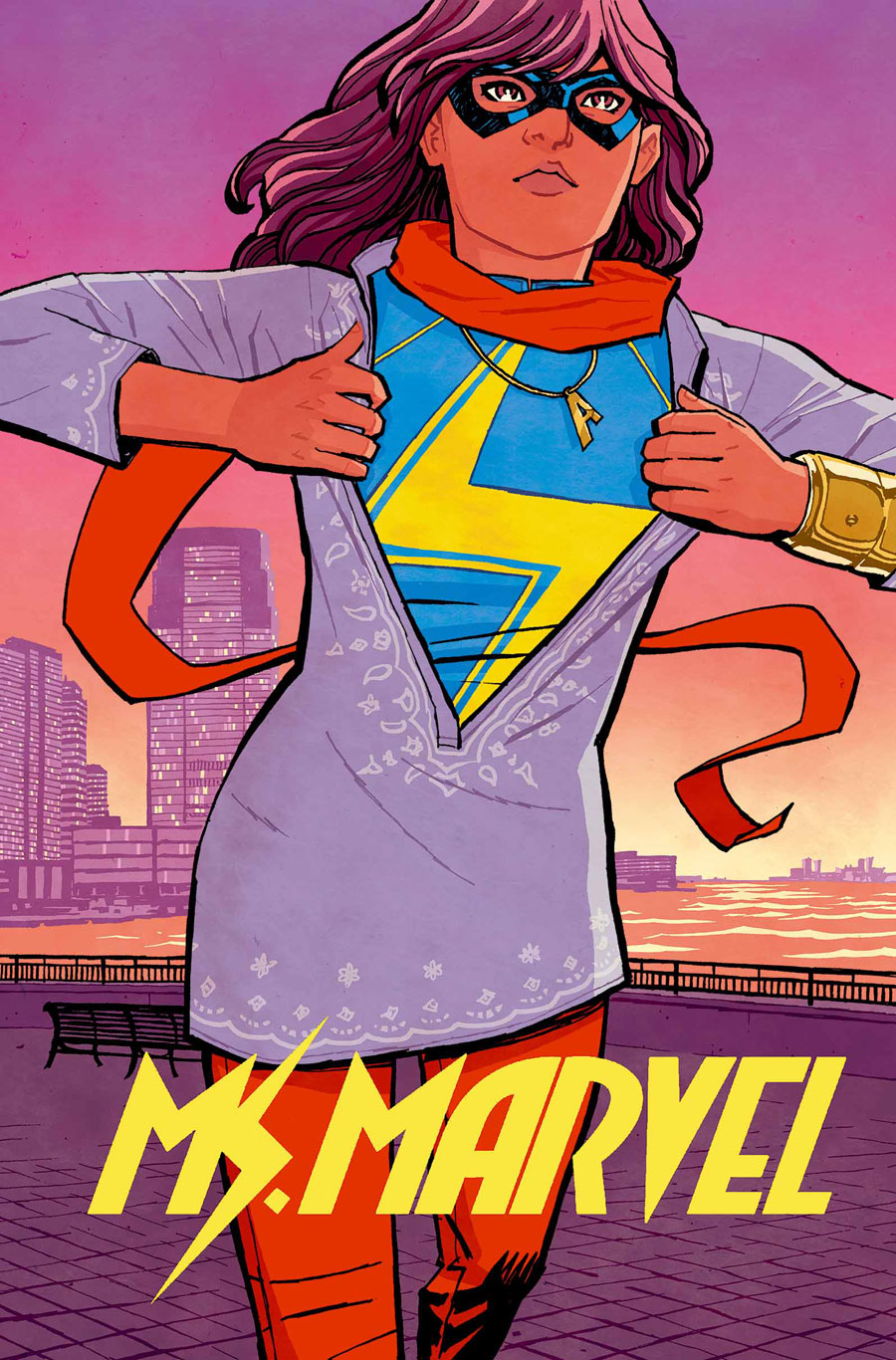 Coming in at #1 for the second year in a row, we have the reigning champion, Ms. Marvel. For the last two years, this title has been a revelation, bringing us the best new character of the last decade. Kamala Khan, much like the book itself, is earnest, sincere, and overflowing with personality. You can’t help but root for her as she fan-girls out when meeting Carol Danvers for the first time, or talks about leveling up her Shaman in World of Warcra…er, Battlecraft. But the strength of the character goes beyond her adorkable charm; in many ways, she is this generation’s Peter Parker. At its core, the Spider-Man character has always been about being able to relate to a hero, and realizing that you can still be good while you struggle with your flaws. Kamala, too, is a character that just about anyone can relate to. While she struggles to protect her home, she also deals with conflicting obligations such as her friends, her family, and her heart’s desires. Her ultimate struggle, though, is figuring out who she is and who she is going to be.

This is a title that is doing a lot to change our view of what a super hero comic can be. It adds much needed diversity to the landscape by having a Muslim teenage girl in a starring role. In a world of bombastic, planet-destroying cataclysms, it places a focus on the small scale, and because everything so well executed, you are just as invested in Kamala having a heart-to-heart with her mother as you would be watching Thor strike down Surtur. This is a comic that tackles issues like generation gaps and gentrification, and yet never loses its lighthearted charm. G. Willow Wilson has quickly risen to the top of my writers-to-watch-for list on the strength of her work here; there’s a heart-felt honesty to this book that keeps me coming back month after month, and remains my top pick of all Marvel’s offerings. So that’s my list! Considering how big Marvel is, there’s certainly a lot of great comics coming out of the House of Ideas that didn’t get covered today. What would have made your list? Please let me know in the comments!

Thanks for reading, and happy new year geeks!