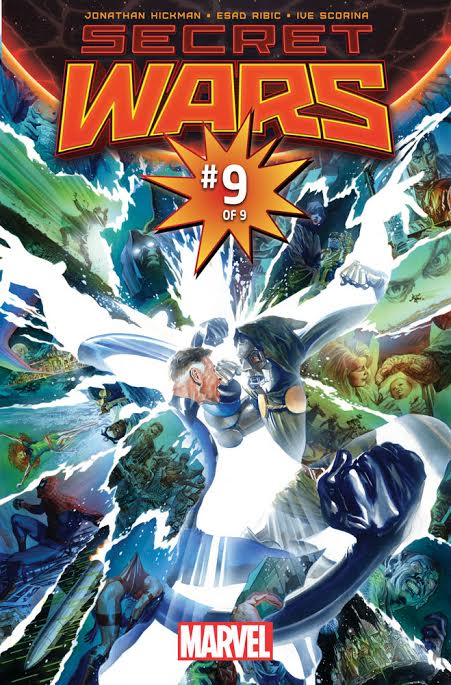 At last all the delays are over. At last we’ve come to the end of Jonathan Hickman’s run on the Avengers. At last we’ve seen the endgame of all his master plans. At last the best crossover event in recent memory has reached its grand finale.

And it was worth every moment of waiting.

When this story started out a few months ago, we were promised that the scope would be epic and the action would be insane. But I don’t think anything could have prepared us for how over the top this series would be. When it comes to this final issue, though, Hickman and Ribic make the action both grander and more personal at the same time. We have both a god-like battle across time, space, and reality between the Infinity Gauntlet wielding Black Panther and a more grounded struggle of personalities between two old rivals. And the action throughout is a sight to behold.

Esab Ribic deserves a mountain of credit for his work throughout the series, and for this final issue in particular. The aforementioned battle of the gods is truly larger than life, but Ribic brings it to life beautifully. Equally impressive is the way that he captures the smaller moments and facial expressions; looks of shock, anger, and joy all come across at different moments, and each impeccably done.

But the real star here is Hickman’s writing. Time and time again, Hickman has proved himself to be a master of his craft, and he’s at the top of his game here. This issue manages to pull off some impressive feats from a storytelling perspective. It manages to balance the epic and the intimate. It comes up with a way to defeat an omnipotent villain that doesn’t feel contrived or ham-fisted. But perhaps most impressively of all, it brings a wonderful sense of closure not just to this one event, but to Hickman’s entire run. The way this book alludes back to pivotal scenes and ideas shows a peerless level of foresight and planning, with the symmetry formed by the last line of this issue and the first line of New Avengers being particularly poignant.

Yes, it sucked that this issue was delayed so much. Yes, it’s been disorienting for the new status quo for the Marvel Universe to be in play before this concluding chapter could be told. Yes, REALLY sucked that the final-page reveal from this issue was spoiled back in October. But all of these are complaints that will fade with time. As story, this event has been spectacular, and every comic fan owes it to themselves to check it out.